Cyclists in San Diego Join in a Lifesaving Cause 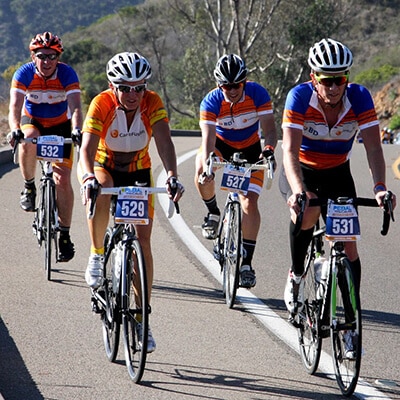 The morning is clear, the atmosphere charged, and the starting line filled with eager cyclists. The starting horn sounds and the 2015 Pedal the Cause ride is on, with hundreds of participants ready to do their part in battling cancer.

PTC was founded in St. Louis in 2009 by Bill Koman, a two-time lymphoma survivor. Koman wanted to give back to the Siteman Cancer Center where he was treated. His goal was to assure 100% of proceeds would benefit Siteman Cancer Center, resulting in the most successful cancer fundraiser in St. Louis. The partner event in San Diego was begun in 2013 and has grown in participation, sponsorships and money raised.

More than 75 BD riders and volunteers participated in the three-day event in September. Several courses were offered, varying in distance from 10 miles to a two-day ride of 150 miles.

BD Chief Operating Officer and PTC Executive Sponsor Bill Kozy offered "When you see both a good cause and passionate BD associates, you want to be involved....so I engaged."

In partnership with Rady Children's Hospital, the Ride for a Child Program connected the BD team with Jadyn Skorpanich, age nine, who underwent lengthy treatment for cancer. Getting to know each other through shared activities and meet-ups, the BD team formed a meaningful connection with both Jadyn and her family.

The BD Pedal the Cause team contributed nearly $150,000 in donations and corporate contributions. In total, PTC was able to present $1,300,000 to find new research, new treatments and one day soon...a cure. Plans for the 2016 event have begun and new target goals set. Debra Jackson, Materials and Supply Chain Director and co-captain of the 2015 team said "I'm looking forward to 2016 and what the power of BD will bring towards supporting this impactful cause."

The Salk Institute for Biological Studies

<<   Back to Showcase Archive